Changes to Games Schedule
Before we go any deeper into it we have made a calendar that visually explains the monthly and weekly schedule for the foreseeable future. 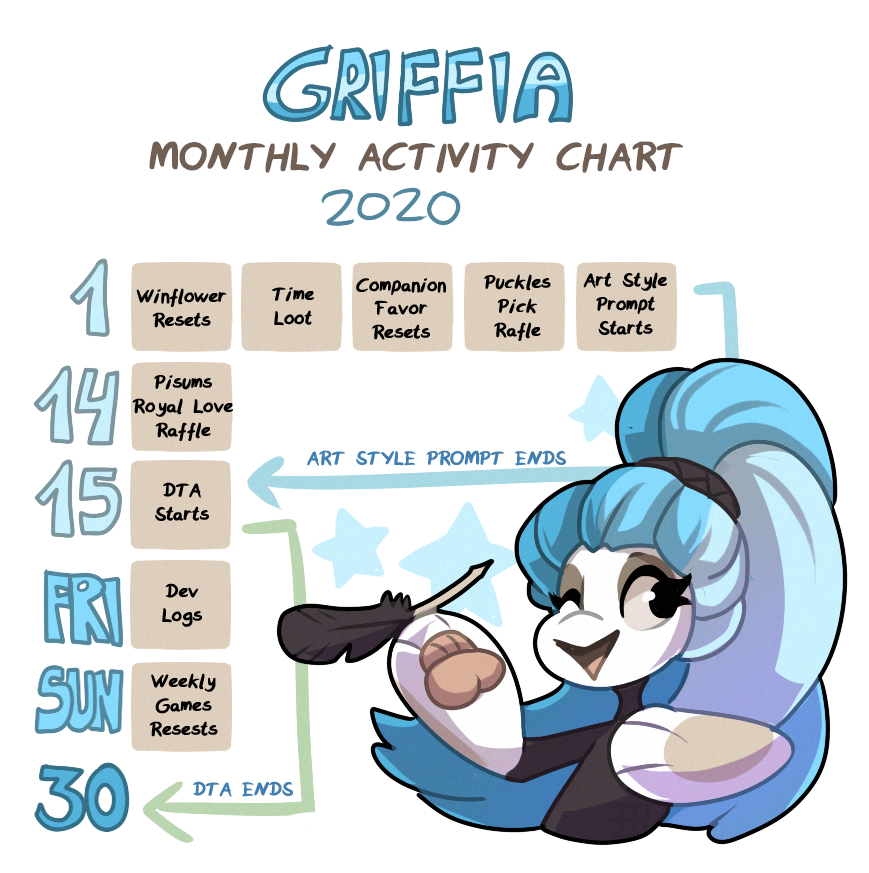 Art Style Prompts
The monthly prompts are returning with a new spin. The prompts will now have featured art styles, similar to how style friday/style challenge was. Since users expressed liking the opportunity to explore more mediums and challenges.

This will award only the prompt trophy through RNG but magic familiars are more than welcome to be used here.

XTA/XTR
The monthly DTA’s will be making their return in November. The Character created for this activity will cycle through the Guest artists.

Companion Favor
We have heard the collective outcry in favor of Companion Favor and we have decided to keep it! Companion Favor will not be retiring in November as previously stated. Instead it will be returning as a monthly game instead of a weekly game.

Griffolk will be allowed to enter this game in companion form so that they can also have a go at trying to get the Favor Ribbon. Due to removing the Weekly theme we replacing  the additional GC bundle for that task with a Background instead. This change happens on November 1st.

ARPG Progress Game Clarifications:
There was a lot of confusion and demand for us to add a task to the ARPG progress game that would return the 5 GC bonus for companions. We cannot do this as companions can participate themselves and count towards 1 of the 3 character slots.

We want to take the opportunity to also clarify that users can do 1 image if you add a soul bonded Griffolk that has 1 tamed companions to fill the 3 character slots.  This will award the 300 GC bonus by completing only 1 image if all tasks are included. If all 3 slots are used with Griffolk that has duo included  and all tasks are completed the maximum possible payout for this game is 600 a week (this math does not include other magic familiar bonuses).

Time Loot Optimisation
Time Loot delivery is going to be changing on November 1st. In an effort to speed up banking times for Time Loot we are turning Chronopod and Time Loot drops into containers that can be opened on the user profile. This will eliminate rolling times entirely and there will be no removal of prizes, just their delivery method.

This method is considerably better for users because Duo can duplicate these crates and gifts. By-passing the exception where Duo does not duplicate Uber Items. This means users should be getting more GC in total from Duo now if the RNG Gods are on your side.

This also allows us to add more prizes to each container from Time Loot which we will be doing. We are going to be including some exclusive items that can only be won in these containers.

Need changes
Because of recent events in Griffia the Queen has really become concerned about the effects of Needs on Timeloot and Time Magic in general. She has changed how loot is delivered and needs cannot reroll drops that have already been banked. So Neo set out and retrained all the Needs to act differently so they can still have purpose. Now needs attached to Time Activities will drop a Need gift instead of providing a re-roll (there is no way for us to continue re-rolling opened loot with this new system so we had to make the need do something else). Zephyr has volunteered to make sure everyone with a need gets a gift and he has hand made the gift envelope and will be sending them out himself.

To claim your Need Gift from your Griffolk’s Stage 3 Time Activity Loot you will continue to use a claim comment similar to what was previously used for Reroll claims. You can can exchange a prize from your Stage 3 Loot list for either your Chronopod Drops or your Stage 3 Crate Drops. Just state which you prefer when commenting. The comment will be updated and an example provided.

The new Gift and Crate drops